Designed with an emphasis on high acceleration and deceleration performance, on top of increased injection speed, this BUILT-IN SERVO SYSTEM demonstrates its effect in molding, for example, super-small capacity, small, precision parts, such as those represented by the fine pitch connector, and light guides for the LCD displays for monitors and mobile PCs when using medium and large injection molding machines.

These injection units incorporate a high response control system that enables high acceleration and deceleration motion control. Compared with conventional control system, communication speed is increased tenfold while scan time is cut in half, allowing the status of the servomotor to be monitored closer to real time.

The volume of communication information that can be transmitted has been increased dramatically, making it now possible to change parameters even while the machine is in operation. 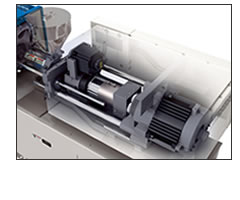 TOYO is further enhancing its lineup of injection molding machines and their options to meet customers’ specific production needs.