TOYO has been continually engaged in basic research concerning die casting technology with Tsinghua University in China since February 2002. 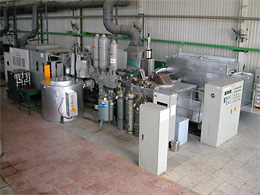 Photograph of the research facilities 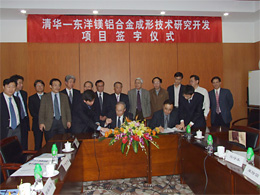 Photograph of the third-period signing ceremony

In February 2002, joint research between TOYO and Tsinghua University* was started. In March 2008, both parties agreed to new three-year plan under which joint research project will continue until at least March 2011.

During the first and second periods, as part of basic research into die casting processes, die casting experiments were carried out repeatedly concerning the relationship between the “casting conditions” such as injection speed and pressure, and “quality “ such as the density and strength of the castings, and the results obtained were used to create a database. The practical output that TOYO has obtained from this database includes “the establishment of analysis software parameters,” “the establishment of a method of evaluating castings,” and “the development of machine performance evaluation software (P-Q2) for die casting machines”. The results of this research were also announced at various meetings and seminars throughout the world, including the “Japan Die Casting Congress”. During those periods, TOYO provided experimental equipment such as a die casting machine,BD-650-V4-N, an automatic ladle for aluminum, an automatic ladle for magnesium, a spray robot, and also technical assistance on casting methods. During the third period, following on from the first and second periods, TOYO is aiming to substantiate its basic data concerning die casting, and also to reflect the data accumulated until now on specifications of the newly developed products. Also, TOYO has provided new equipmentincluding the latest 350-ton die casting machine to carry out research and testing during the third period.